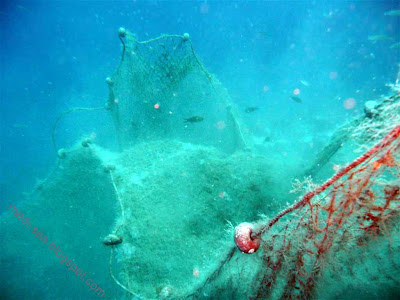 While diving at the island of Lesvos with the diving team of the University of Aegean we meet a ghost net. Ghost nets are the remnant of fishermen nets that left or lost at the sea. Unfortunately those nets are still able to trap some animals like the Scorpaena sp., sea turtles and slipper lobsters. This is the common name of the specie of lobster Scyllarides latus. These lobsters have instead of antennas and claw some strange spoon-like tools that help it to unstick his prey from the rocks. It usually feed with limpets. It prefers to stay all day in a shaded cover or an opaque shelter to a transparent shelter of the same dimensions. Lobsters also demonstrated a significant preference for shelters with more than one opening and for those that were in a horizontal as opposed to vertical position according to misters E.Spanier and G. Almog-Shtayer. Its noctural behavior is due to that most of his predators like Balistes carolinensis and Epinephelus marginatus are diurnal. If it’s being attacked it demonstrates a “burst-and-coast” type of swimming found also in some negatively buoyant fast-swimming fish according to Ehud Spanier, Daniel Weihs and Galit Almog-Shtayer. These guys also inform the scientific society as they research on slipper lobster swimming that its acceleration range between 250 and 500 cmXs^-2. In the results of the same research we can learn the interesting “This intermittent fast swimming is assumed to be used by lobsters to escape, especially through the back opening of their diurnal shelter in case a predator is successful in penetrating it. It is of short duration and is suggested as an emergency means in which the animal invests considerable energy resources to reduce its exposure time in an open area until it reaches an alternative shelter”. 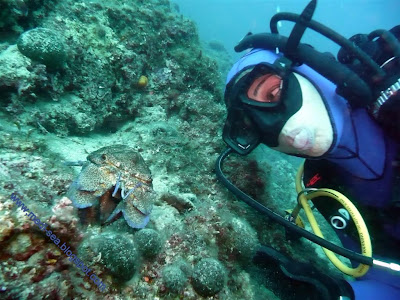 All the above make the young environmentalist Elena being charmed by the strange lobster. We meet him moveless in the fatal trap of the ghost net. At first I thought it was dead but the still bright full coloration alert me that it was still alive. I used carefully my diving knife to set it free without harm it. If you ever try to do something similar remember that it can also harm you if your hand hit by its large tail. This behaviour have give it at Greek the name “kolochtipa / κολοχτύπα”. Elena fast felled in love with the lobster and started kissing it! It thanked us by pose for some pics.
Slipper lobster are easy to be catch by spear fishing divers and that has lead to being an overfishing suffering specie. 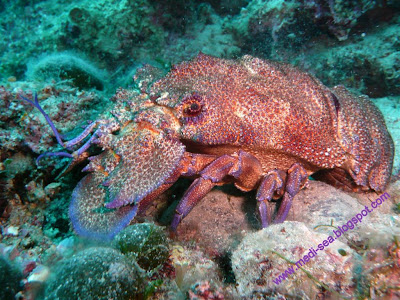 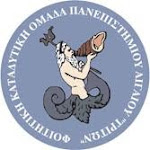 Save the mermaids. Don't disturb the dreams.